As the receiver is moved horizontally through the electromagnetic field, current increases and decreases relative to that proximity. The amount of current the receiver picks up is communicated to the user through an audible tone and visual display. The source of that electromagnetic field can be from a transmitter, but not always. There are passive electromagnetic fields all around us. For example power lines, cathodically protected gas lines, radio stations signals; virtually every pipe and cable that has metal or continuity carries some electrical charge that creates a detectable magnetic field.

The earth itself is a strong magnetic field. With all the electrical noise around us it’s important to understand how we can translate what we hear and see what our locator is telling us.

The Radiodetection receiver is made up of 5 antennas. 1 hollow round core antenna in the middle surrounded by 4 ferrite core antennas.

Ferrite core is a type of magnetic core used for its properties of high magnetic permeability coupled with low electrical conductivity (which helps prevent cousin eddy currents). In short, they read all frequencies cleaner and concentrate the signal into a smaller pathway making the locator lighter and ergonomically sexy.

The center round antenna controls the compass on the screen of the receiver and it's always on the screen. However it can be shut-off by entering into your advanced menu system by giving your On/Off key a quick press.

This compass detects the position of the magnetic field, which should match the direction of your target line. If the target line starts to turn, the compass will direct you the way your current is headed.

For example, if you are locating gas or water service to the main, when you get close to the main you have two magnetic fields intersecting causing your compass to tilt. Your compass will magnetize the direction where more of your current is headed when you are directly over the T or the intersection of the two pipes. When your compass isn’t directly lined up with the field or confused by multiple signals your automated depth reading will not display. This is because your locator knows the field is not clean and therefore an accurate depth may not be possible.

The same goes for when you are on a multi line corridor. If your compass is attracted to some constructive current from a neighboring line it will tilt towards that line until your field is isolated again. This is a good indication of interference and the direction your locator is mis-locating. If the neighboring line contains destructive interference it will tilt away through your locate until you're back into a clean area again. This is a good indication your signal isn’t properly isolated.

The benefit of the Peak antennas are they allow for a larger sample size of current and the user can determine the orientation of the signal. Horizontal antennas are the best choice for locating utility lines, which are also horizontal. They ignore any lines crossing perpendicularly against your locate, eliminating unwanted interference. They are also a good choice for locating near T’s and elbows because they won’t pick up the interference from the perpendicular magnetic field crossing your path. This gives you a much tighter locate at a turn.

Vertical antenna’s gives a NULL response when directly over the line because the field does not flow through the aerial antenna. When you move the ariel to the either side of the field the flow goes through the antenna and gives a response. The sharp “non” response of the vertical Ariel is easier to use than the flatter peak response to the horizontal antenna and gives the user Arrows telling them the direction of the line. However, it is vulnerable to interference and should not be used for locating except in areas with no interference. A vertical Ariel indicates line position but not its orientation, which makes for locating around elbows and T’s difficult.

The very bottom horizontal antenna is represented by a small hill icon. This is called single peak mode. In a peak response the bar graph and numbers are greatest when you’re direct over the strongest part of the magnetic field. A tide mark appears on the bar graph when the peak is reached making it easy to identify the location of the line.

Single peak mode is one of the most accurate antenna responses because it’s closest to the ground and to the center of your magnetic field. The only drawback is that using a single antenna creates a wider peak response making it less evident when you are directly over your target. The audio and visual response is wider. For a quicker audio and visual response the dual horizontal peak antenna are a good choice.

The dual peak mode is represented by a large hill icon. The dual peak mode also has a more acute and quick visual and audio response making it the preferred mode for experienced locators that use mostly audio to perform their locates. Dual antennas also allow for some fancy algorithms to be implemented by Radiodetection, which we will discuss in a moment.

Peak & Null combined mode. Peak and Null combined is exactly how it sounds. It uses all 4 antennas simultaneously to give you the same responses that you would get using them individually. Why do this? Well because it’s like using two style of locators in one. If your arrow response and your peak responses are in the same spot, you’ve probably got a good locate.

So what if they don’t agree?

Remember back in 8th grade when you were taught to apply the Pythagorean Theorem to determine unknown side lengths in right triangles in real-world and mathematical problems in two and three dimensions… Well this isn’t quite as complicated. But it is about triangulation.

Locating perfectly round magnetic fields is easy. Any antenna configuration will do fine. But what if we curve it? When you get two magnetic fields in the same area they either push away or pull together just like two magnets would. This is called destructive or constructive interference. Signals that travel in opposite directions detract or push off causing you to locate further away from the interfering line. Signals that travel in the same direction will pull towards each other and this is known as constructive interference.

Radiodetection uses a multitude of antennas with fancy patented algorithms and filtering to provide the truest locate response it can. When you are using the dual peak antenna mode or the dual null Guidance mode, the machine is comparing the response between the bottom and top antennas. The bottom antenna will always give a more true response because it lies closer to the center of the magnetic field, whereas the higher antenna will locate further in the direction the magnetic field is getting pushed or pulled towards. But by comparing the two responses at a known distance, which is the distance between the aerials, and applying RD’s version of the Pythagorean theorem, the machine can deferentially correct itself and provide a more accurate locate response. So in using the combined peak/null gives you all the info at once. But within the peak/null response there are two different types of null you can select from that are triggered by long pushing the antenna button for two seconds. You’ll see the word “null” or “Guide” on the bottom left of the locator appear. The null style arrows use the single vertical antenna, the guide style arrows uses the new guidance dual mode that is much more accurate. You should verify you’re in guidance arrows (which are elongated on the 8100 series). Some people are old school and like the single null antenna to compare against dual peaks to work their own Pythagorean theorem in the field. Me, I like to just lift up the locator a foot. If you lift the receiver exactly a foot and it still locates in the same spot and adds exactly a foot to the depth reading, well then you have a good locate.

The easiest way to learn the antenna response is to create an electrical loop on the floor with your extra 30ft spool of wire supplied with the Radiodetection unit. This creates a destructive magnetic field. Hold your receiver over the line about a foot and see where all the antennas pinpoint the line. Play around with it. Move the wires closer or further away and try different frequencies. Compare your 8100 receiver antennas and see how the responses are different. And then if you want to really have some fun, compare your smoking hot Radiodetection unit used by simple Jack and made in Wuhan. Impress those rascals with your diamond cut precision ferrite core antennas and your new found way of mutton busting a magnetic field. Now go get yours! 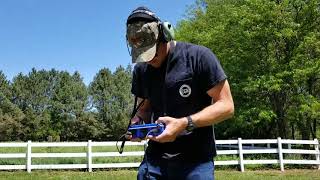